manage your task list without leaving Gmail with clearmyinbox

Clearmyinbox is a plugin for web browser (specially for Chrome and Firefox) that enhanced Gmail user experience by providing a fast an easy way to convert inbound emails into tasks so that you are able to archive or delete your original message and remove it from your inbox. 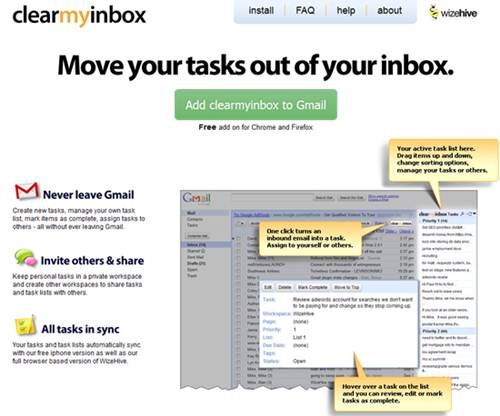 Integration of the entered data is done with the task manager and this feature is achieved by Clearmyinbox so that it provides you the facility to jump to the necessary location of your email as you like.

It has specially designed for advanced users and this is the only limitation of Clearmyinbox. Task list as well as tasks is organized within the Workspaces by the Clearmyinbox.

A pretty simple task manager is provided by Gmail that enables a great deal of communication platform both for the professional and personal. Priority inbox has been recently launched by Google that helps in the prioritization of email that enables the creation of tasks via a separate tool in-order to be used by people for their respective organization.

Clearmyinbox provides a task manager that is comprehensive and is used by using their respective Gmail account. Task list of your own are displayed by Clearmyinbox directly on the Gmail screen itself. You can have one list for phone calls, another for projects, or any other grouping you want.

To create or edit task lists create a new task and then click on the "options" button toward the bottom of the task list window and then click on "manage" next to task list.  You can then use the options icon from the task list itself to group your tasks by list. Syncing of your task lists as well as task is possible using the app of iPhone and with the accounts in WizeHive. Clearmyinbox works freely with Firefox and Google Chrome.

10 Best Video Projector You Must Try

10 Best Document Scanner You Must Try