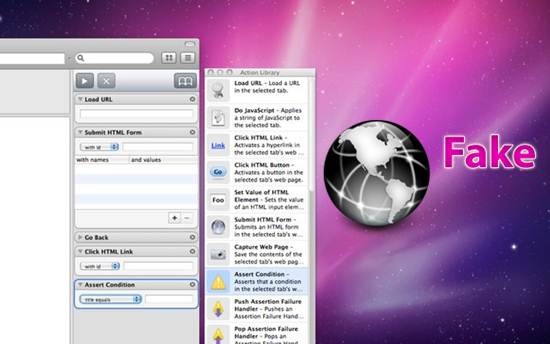 Fake lets you drag the discrete browser Actions into simple graphical Workflow which can be made to run several times without having to do anything more. User can easily Save, reopen and share Fake workflow which you have created.

Fake web automation technique is purely inspired from Apple’s own Automator application and the User interface is also combination of Automator and the Safari UI.

Its main function is to let you run and re-run "fake" interactions over the web. The difference with Automator is that Automator only controls the work running on Mac OS X, but Fake allows you to script almost anything you do on the Web.

When you look at it, at first Fake looks like a pretty simple Web Kit -based browser, with tabs providing graphical previews of the currently opened pages.

There is a floating pane from which you can drag and drop into a space provided on the right side of the Fake window, which creates a custom workflow which in turn handles the several online tasks.

At around $30, Fake is bit pricey for general users, unless wrist-numbing and boring tasks are what you do most, over the Web. But for serious web coders, its smooth and clear execution surely makes Fake an amazing and time-saving investment. Try the free trial version once. It is a must try app.

WebsitePainter for Mac – website creator and HTML editor for Mac