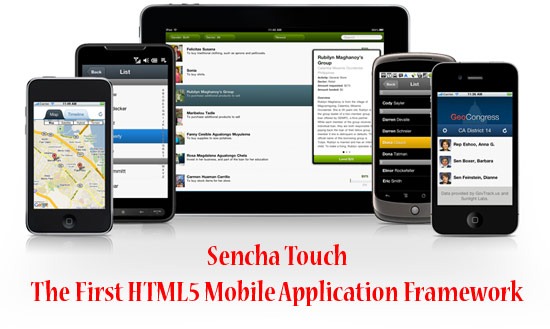 The Framework allows you to develop web applications that look and feel native like apps on Apple iOS and Google Android touch screen devices. It makes specific use of HTML5 to deliver components like audio and video, as well as a local Storage proxy for saving data offline and CSS3 for provide the most robust styling layer as possible like rounded corners, background gradients, and shadows — can be added, changed, or removed with one line of code.

Sencha Touch is a cross-platform library, that why it uses a groundbreaking method to eliminate the problem of different resolutions found across all devices. Developer can easily change the overall scale of their interfaces on the fly without pixellation. This way, buttons are always big enough to tap, regardless of the screen they’re on.

Sencha Touch also has powerful robust animation system, which allow you to create easy, flexible animations between screens and views. Slide, pop, and fade animations are included with the library, each with a robust set of options to change attributes like direction and masking style.

Just like other frameworks, Sencha Touch also come with an incredibly powerful data package. Developers can easily request data from a wide variety of sources whether by Ajax, JSONp, or YQL, bind that data to specific visual components or templates, and then take that data offline with localStorage writers.

Get real time updates directly on you device, subscribe now.