Glimmer is a jQuery Interactive Design Tool that allow you to easily create interactive elements like rotating photo-galleries/mastheads,drop-down navigation, hover effects, or custom animations on your web pages by harnessing the power of the jQuery library.

Without having to touch a piece of JavaScript code, you can easily create interactive experiences in your website by using simple and powerful UI-based composer. It also has an advanced mode, which providing a design surface for creating jQuery effects based on your existing HTML and CSS. 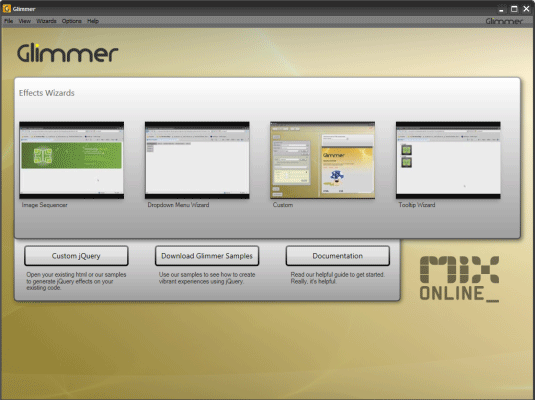 Whether it be for advertising, mastheads for your website, perhaps, or an image gallery for your photos, Glimmer’s Image-Sequencer Wizard help you to rotate image banners, or any kind of image sequencing is a snap. Just tell us which photos, and a little information on how you’d like them to act, and Glimmer does the rest.

If jQuery is the “write less, do more” JavaScript library, then Glimmer is the “write none, do more” jQuery design tool. Glimmer has three core audiences: power users, designers and developers.

First, Glimmer is optimized for the power user or web author who wants to use step-by-step wizards to create common interactive web experiences like image sequences, animating dropdown menus and tooltips. For these scenarios, Glimmer makes it super simple, generating HTML, CSS and jQuery and packaging it all up, ready to be slapped on a server.

Second, Glimmer is specially targeted experienced designer who has strong knowledge about HTML and CSS , it provides a simple visual environment to create web animations and experiences entirely through a tool. Any HTML file can be imported to Glimmer and then the elements inside that HTML file can be visually selected and manipulated, creating effects based on events that happen on the web page like load, mouseover, mouseout, submit and more.  These effects might include opacity fades, position movement, scaling of items and manipulation of the HTML, both through appending/removing HTML and through modifying the page’s CSS on the fly.

Third, it has a WYSIWYG editor that generates code which can be inspected, analyzed and then potentially tweaked or modified. Using a tool in such a way is an excellent path to learning.