JsChat is an simple Open source real-time chat system based on JSON protocol and It’s built with Ruby and Sinatra (Sinatra is a tiny Ruby web framework). it included a server, a console and web clients. 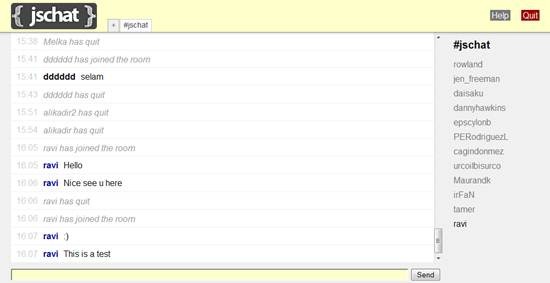 JsChat is similar to IRC, but it’s a fundamentally simpler system and provide very useful features like:

JsChat now has Twitter authentication, logging with mongodb, and the web interface has tabs for switching between rooms.  Twitter auth and mongodb give JsChat persistence. People can sign in with Twitter, join a set of rooms, then sign in from another computer without appearing to log off JsChat.  The user stays online until they’ve been idle for 7 days or they click Quit.