MotherApp Engine is one of the best mobile apps development platform that allow web developers to create native mobile apps on iPhone, Android and Blackberry using HTML instead of the mobile SDKs. 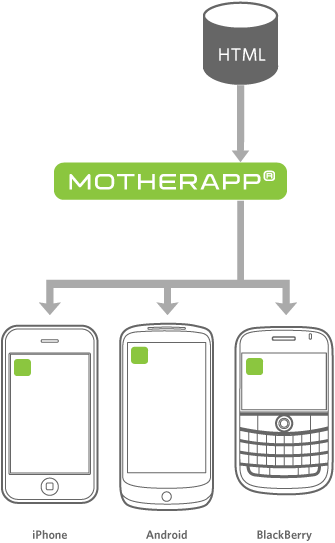 The platform is based on MotherApp HTML, which converts HTML with special markups into native apps for every major mobile platform. Simply put, there’s no more need for multiple SDK knowledge. it’s an advanced cross-platform framework that can turn applications coded in MotherApp HTML into native widgets, with the look, feel, and functionality the user expects on his mobile device.

It makes it easy for you to create content-based native apps across a wide set of mobile platforms, without having to learn several new programming languages and SDKs. Mobile applications can be built quickly, inexpensively and robustly.

by using one source code base – MotherApp to generate apps on multiple platforms not only saves you money, it saves you time. You spend less time on coding, less time on testing, and less time on fixing your code than if you have multiple source versions. You can create apps in weeks, instead of months, keeping you ahead of the competition.