Linux is not considered for use, especially for the developers who need the help of the RAD tools. Though there a very few tools in Linux that are of some use but still each and every developer charge $10,000 or even for working. 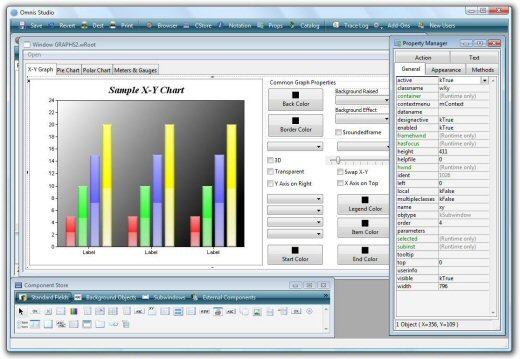 Recently the Omnis Studio has been developed by the Omnis Software that lay the field of software development in Linux.

The various products of Linux are now being shipped from one place to the other in-spite of the fact that this company has been in the market for twenty years or even more.

The approach of Java is being taken by the Omnis Studio for the development of the software that enables the creation of only a single program for a cross-platform that provides a development environment that is highly graphical.

The visual elements can be simply dragged-and-dropped onto the design window of yours with the intention to create the type of appearance as per your liking.

This studio possibly run on all the major operating systems of the desktop including Mac OS X, Windows & the users of Linux in teams as well as single users for testing, development, deployment and previewing applications seamlessly without depending on the type of platform being used.

There are around 70 built-in Components (menus, buttons, reports, fields, pictures graphs, and many more) and Objects in the Studio that provides a great deal of flexibility for designing any kinds of project from the databases of single-user to the business solutions that are fully-fledged.

Omnis Studio is highly graphical and takes the approach of Java that strengthens its flexibility.