TaskAnt is a user-friendly online project management and task management software that helps you create, assign and manage projects. It provides a compact, but useful way to handle the projects created and distributed among the team.

The assignees once invited get a clear idea of their work at hand with the help of this interface. In addition to being shared listing software TaskAnt overshoots E-mail with the additional features for task management and project handling. Owing to its extremely user-compatible algorithm TaskAnt is an inherent time saver. 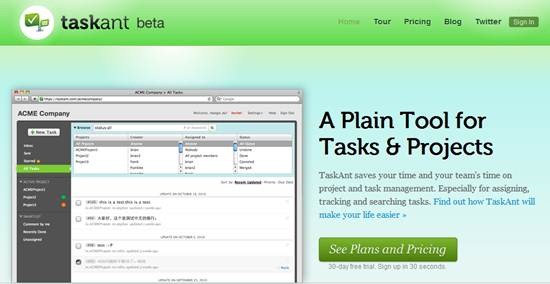 It has online user interface that allows you to assign your project to any team member anywhere in the world. The task you send is received by the assignee in his inbox.

The assignee can then use the TaskAnt interface to complete his part of the job. The project is viewable and modifiable to only those who you have invited. Thus it provides reliable security.

TaskAnt also gives you a smooth set of browsing tools with which you can search for or modify any part of the particular project.

The tools provided by TaskAnt enable the team to work faster and better efficiency. Once a task is complete, it can be easily saved and kept for future use.

You can merge together two projects if required or cancel the merging but the power to make such modifications is vested only in your hands i.e. the project creator or administrators you have assigned. A cancelled project is not deleted unless manually done so.

Although it is still in its beta stage, TaskAnt has been widely accepted as one of most user-friendly task management software.

The 6 Best Free Tax Return Apps for Android in 2021

Vitalist – The Best Online task manager based on GTD…

The Best 15 Ruby on Rails based project management software…